The sea of Costa Rei and especially the one in front of our campsite is really fantastic, but on holiday, between a bathroom and another, you always take advantage of the free time to explore and find the curiosities of the territory! For this reason, I thought to show you some more or less hidden corners that you can visit when you are here, to make your camping holidays even more exciting and unforgettable! 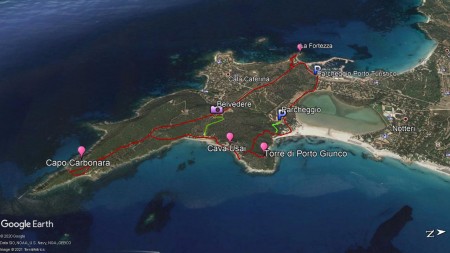 Clothing: Hiking shoes + swimwear if you can take a swim!

Starting Point: Parking at the touristic harbor of Villasimius or from the beach of Porto Giunco

This winter with some friends I did beautiful trekking in Villasimius that even passes in a granite quarry, and I thought it might be really exciting for you too!  In the picture taken from Google Earth, I marked the path so I could find it more easily (photo 1).

But let’s proceed in order… we parked the car in the touristic harbor of Villasimius, taken « Via dei Giunchi » that is right in front and bordered the Pond of Notteri (with its fantastic pink flamingos), so we reached the beach of Porto Giunco.  Following the path, we went up to the beautiful Spanish watchtower (photos 2 and 3) built and around the sixteenth century to defend the populations from raids from the sea by Saracen pirates.

The climb to reach the Tower of Porto Giunco was easy and well signposted. Once there the view is breathtaking (photo 4). After the photos and the ritual selfies, we went back a hundred meters, up to the fork and we followed the path signposted on the left towards Cava Usai! 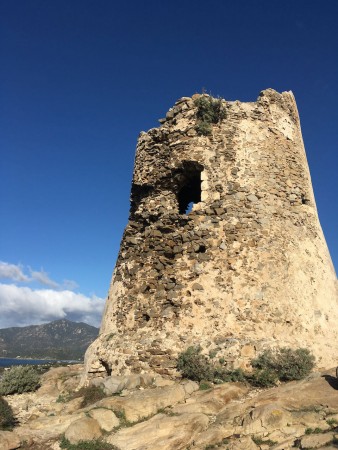 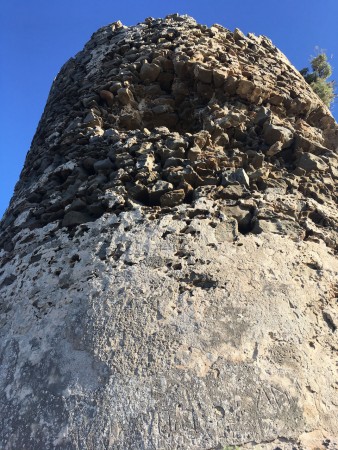 The descent, which makes us fall on the other side, deserves a little ‘attention because it is not easy, but calmly and with the right shoes is easily passable even by children!

Walking this stretch was the real discovery: thanks to the wonderful winter sun, we found ourselves having along the descent, to the left the blue of the sea, in front of us the shimmer of granite (photo 5) and all around the Mediterranean scrub with juniper, olive and mastic trees! In short, a wonder of colors and scents!

The quarry is also a splendid example of industrial archaeology, where among the pebbles of the beach, the processing waste (photos 6, 7, 8), and the ruins of the manor house and the caretaker (photo 9), you will certainly be fascinated too!

Think that part of the granite extracted from Usai’s Quarry (active from the mid-19th century until the mid-20th century), was used in large public works on the island of Malta, but also to build portions of the Port of Naples and Via Roma in Cagliari! From this point, you can see very well both the island of Serpentara and the island of Cavoli. 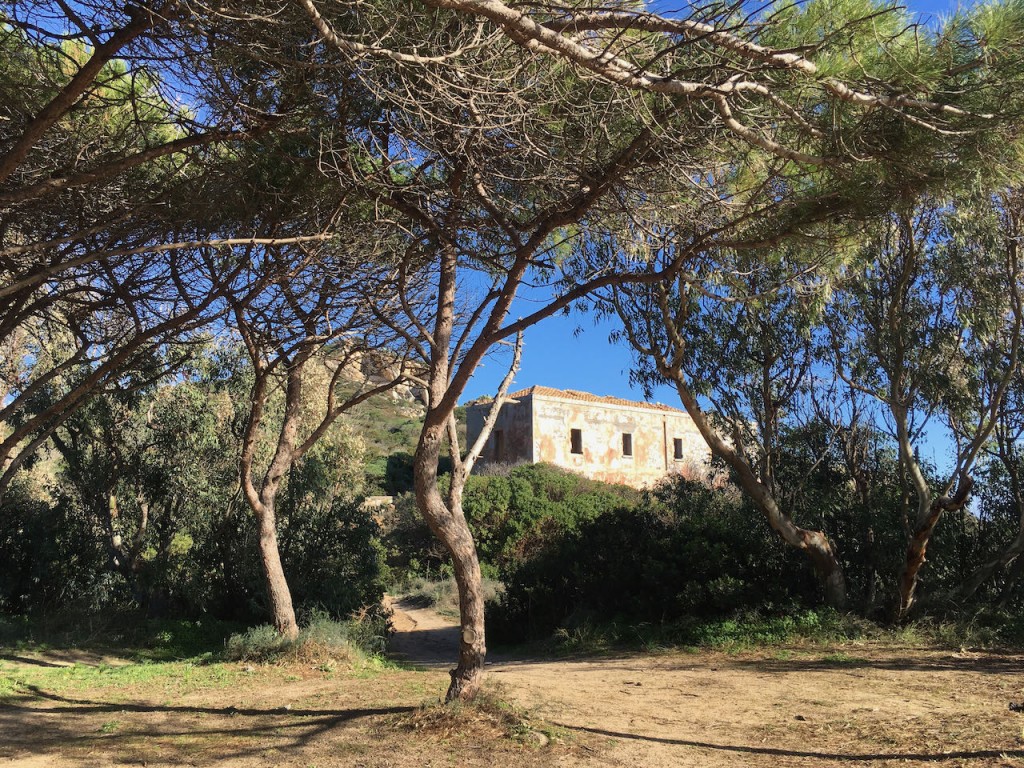 So we find ourselves on the beach of Capo Carbonara (photo 10), which owes its name to the intense exploitation of charcoal, once practiced in the area, we cross the parking lot, where in summer you can also find some refreshment points, and continue on the path towards Cala Burroni, where after a climb, you can admire the western side and the cliff almost overlooking the sea!

The route is not difficult but if you prefer something simpler you can go up to the Belvedere and continue from the dirt road (green path on map photo 1).

We did not venture to the tip of Capo Carbonara (which is the most extreme point of the south-eastern coast of the island) because the wind too strong that day, but it is easily accessible by continuing to follow the path. 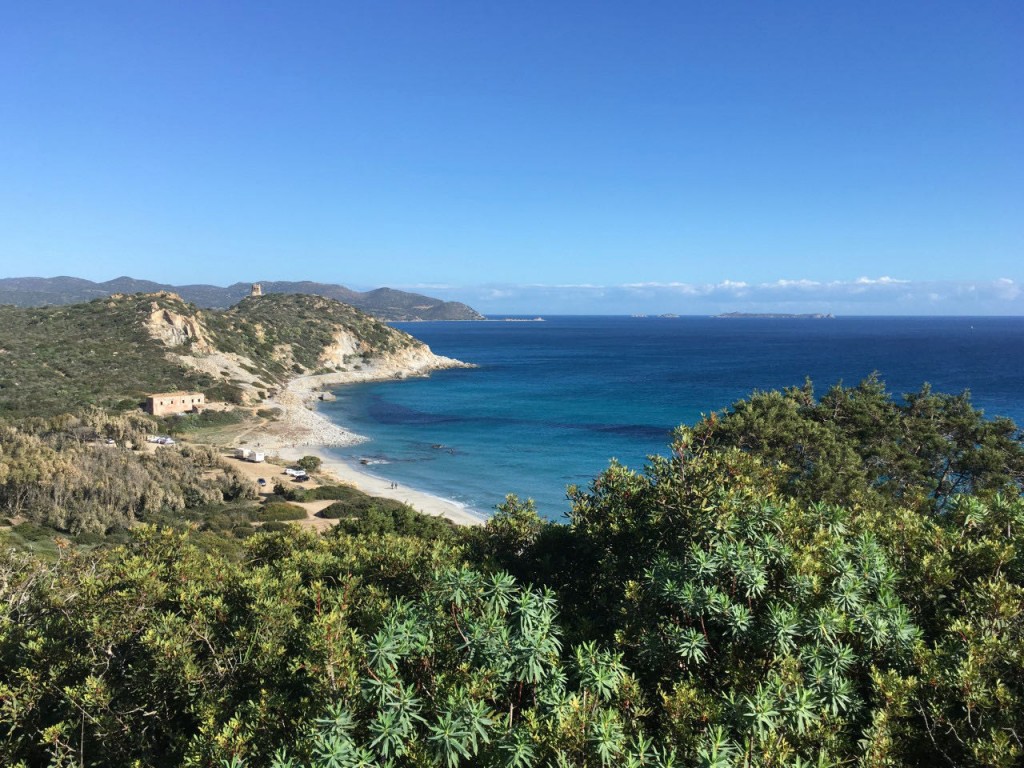 At the return on a dirt road, we also made a stop at the Old Fortress.

It is a fortification close to the marina, which was part of the surveillance system of the coast and since the end of the sixteenth century, within its wall, with the entrance raised and facing the sea, the boats of the Corallari and the tuna fishermen were sheltered and the fish was kept safe.

Unfortunately during the winter and Covid cause, the Fortress could not be visited inside, but surely tells a very interesting piece of the history of Villasimius that deserves attention and a visit (during the summer is always open so take advantage of it). We did not miss the trip to the port to return to the starting point where we had parked the car.

The excursion is not complicated, even the children can do it quietly (then maybe those who prefer not to do it all together, can divide it into several stages since it is possible to park the car at various points).

Then remember that I made this route in December, during the summer a stop for at least a swim in that wonderful sea, is a must!!!

Obviously, for any information, you know, we are always available: we like to make your holiday unique!

To the next adventure!